Three-Way Battle for the Gold Between Merson, Syvlia and Balsiger

Merson, Sylvia and Balsiger Three-Handed for the Gold

D'Alesandro Leads Into Day 4 with the Money Bubble Looming

That’s a Wrap! After five levels of monstrous poker action, Day 3 of the 2012 World Series of Poker Main Event has come to an end. Leading the field heading into the all-important Day 4 is Dave D'Alesandro, who finished up the night with 1.1 million in chips.

D'Alesandro will join approximately 720 other hopefuls who are still in contention to make a run at the title. All of those players will be vying to at least make the top 666 players to pick up a $19,227 min-cash and then continue their journey toward the final table, the $8,527,982 first-place prize, and of course, the gold bracelet.

It started over twelve hours ago when 1,738 returned to the Rio All-Suite Hotel and Casino with the hopes of making it through the night. However, as is always the case with poker tournaments, not everyone can survive. Some of those who hit the rail throughout the day include Abe Mosseri, John Racener, Chris Tryba, Vicky Coren, Barry Greenstein, Bryn Kenney, Karina Jett, Eugene Katchalov, Faraz Jaka, Nick Schulman, Brian Hastings and 2011 WSOP Player of the Year, Ben Lamb.

Also not managing to survive Day 2 were past WSOP Main Event champions in Dan Harrington (1995), Robert Varkonyi (2002), Jerry Yang (2006), Peter Eastgate (2009) and the defending champ, Pius Heinz. The last hand of Eastgate’s tournament occurred early in the day, with him calling the five-bet all in of Nghi Van Tran on a

. Eastgate had plenty of outs to survive and double up, however, it wasn’t meant to be as a

river sent him to the rail. While these Main Event alumni couldn’t endure Day 3, Johnny Chan and Huck Seed advanced to Day 4 with a chance to win another title.

Some of the others who joined the rail throughout the day were former NBA Champion Earl Barron and international cricket star Shane Warne. These sports stars may not have been able to hang on to life, but NHL goalie Roberto Luongo survived the night and will return for Day 4 action. 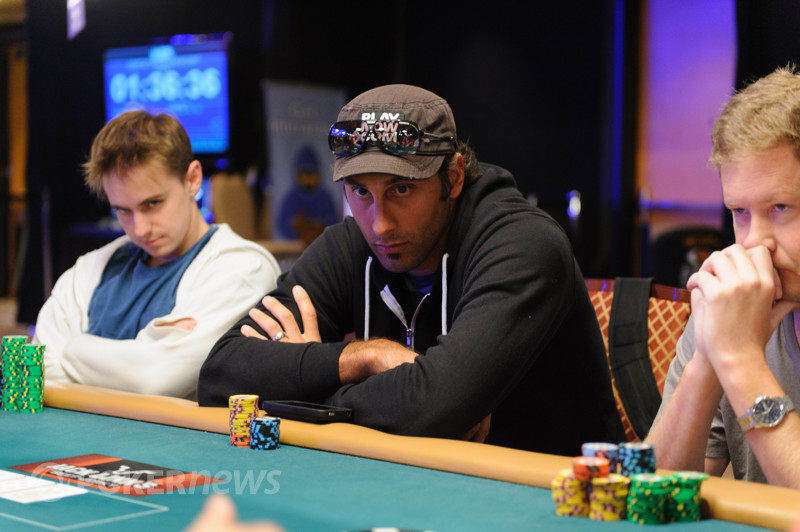 Luongo in action earlier in the 2012 WSOP Main Event

One of the NHL's premeir goaltenders, Luongo is no stranger to playing on a big stage. He was the starting goalie for the Gold-Medal-winning Team Canada in the 2010 Winter Olympics and is the 17th winningest goalie in NHL history. This isn't Luongo's first time at the WSOP, having played in the NHL charity shootout in 2009. However, it is his first time playing in the Main Event. With the bubble looming, Luongo will be looking to make this his first WSOP cash as well.

Gaelle Baumann, who started the day with the chip lead, also survived the night, bagging up 599,000 in chips. Another lady of poker who will be aiming to make a deep run is Vanessa Selbst, with the two-time gold bracelet winner having a roller coaster day that saw her bag up a stack of 814,000. A highlight for Selbst occurred late in the evening when she scored a massive double up with the help of a lucky river.

The likes of David "ODB" Baker, Shawn Buchanan, Marcel Luske, Jason Somerville, Maria Ho, Daniel Negreanu, Sorel Mizzi, Mike McDonald, Shaun Deeb and Antonio Esfandiari are just a few of the other notable names still in contention. With these big names of poker still in contention, it is clear that the next few days are sure to be some of the most exciting of the summer.

With approximately 54 eliminations needed until the players are in the money, the bubble is expected to burst during the early stages of tomorrow’s play. Join PokerNews from 12:00 PM PST and be sure to not miss all the action on Day 4 of the 2012 WSOP Main Event!

river and Tran went into the tank.

for nothing but king-high. Tran jumped up and down and showed

for a rivered pair of deuces. The table burst into laughter and Alcober took a major hit from Tran's river call.

Dave D'Alesandro has had an excellent final level and it may be give him the end-of-day chip lead.

, but was sent to the rail after the board ran out

"Action" Dan Harrington, who won the 1995 World Series of Poker Main Event, has been eliminated from the 2012 Main Event.

According to a player at the table, Harrington three-bet jammed over a raise on the button, and Russell Thomas (the original raiser) called. Harrington's

, and Action Dan was never able to catch up.

The Thrill Is Gone

Will "The Thrill" Failla has been battling with the short stack for most of the day, as he explained to Lynn Gilmartin on the last break in the video below. But unfortunately for him, the battle ended unsuccessfully during the final hands of Day 3.

The end came in a hand in which Eric Cloutier opened for 11,000 from the cutoff, a player on the button reraised to 26,000, then Failla reraise-shoved from the big blind for 84,000 total. Cloutier responded by pushing all in himself, forcing out the third player. Cloutier and Failla then turned over their hands.

After a day full of laughs at Table 440, a most unfunny final hand for Failla. The board ran out

Michael Binger was all in preflop for his last 145,000 with

, but he ran into the

of Susie Zhao. The board brought no miracles for Binger, coming

, and a devasted Binger headed to the rail. Meanwhile, Zhao is continuing her solid main event run, as he is up to 600,000.

Deeb Gets a Fold

Shaun Deeb opened for 8,500 from under the gun and was called a player in middle position, Brian Meinders on the button and another player in the big blind.

and both the player in the big and Deeb checked to the player in middle position, who fired 16,500 into the middle. It was folded back to Deeb, who called.

Both players checked the

turn, however, when the

completed the board, Deeb fired a hefty 44,000 into the middle. His opponent fell deep into the tank and after about three minutes, had the clock called on him by another tablemate. A floorman came by and gave him a minute to act on his hand. He eventually folded with about five seconds to go and Deeb scooped the pot.